When I told my mom that I’d be dancing to a song about heaven, she asked me if I’d be able to handle it. Be able to get through it. I think she was/is worried that I’ll break down. I’m pretty confident that’s not going to happen, but if it does, I’ll be surrounded by people who can help me off stage, bring me a box of kleenex, and put their arms around me.

A few of my friends said that they would cry through the whole thing. I’m going to let you all have your tears and thank you for them! For fans of CCM, it’s a popular song. A powerful song. Many have attended a funeral where it’s been sung.

Surrounded by Your glory, what will my heart feel?
Will I dance for you Jesus or in awe of you be still?
Will I stand in your presence or to my knees will I fall?
Will I sing hallelujah, will I be able to speak at all?
I can only imagine.   ~lyrics by Mercy Me

This song was sung at the funeral of my friend Beth who died of cancer at age 36. I always think of her when I hear this song on the radio. But before I heard it at her funeral, every note, every word had been burned on my heart…it was one of the songs that had helped me after my daughter died unexpectedly at age two. The only thing that has made losing a child bearable is the confidence that I have she is singing and dancing with the angels in heaven, worshiping at the feet of Jesus.

So I love songs about heaven.

“Dancing through a season of grief.” That’s the title of this blog post. I called it that because this is my season of grief whose beginning is always marked by the daffodils breaking through the frozen ground in my front yard.  That happened this week. My daughter’s birthday is this weekend. Then her heaven day is right around the corner–a week before the dance performance. My daughter died Easter week so the anniversary of her death is always marked twice for me since Easter floats around and isn’t a fixed holiday like others. So the performance is sandwiched between those two “heaven” days.

So how has this been for me so far?  Fine. Part of it is that at rehearsal, I’m just so concentrated on learning the choreography that I don’t have time to be consumed by grief. One night,I  put the song on with no intention of feeling anything and just started sobbing. But that was once. Don’t know if it will happen again.

Stay tuned. I’m not just dancing to Mercy Me’s, I can Only Imagine. I’ll be dancing to two songs. More on that later.

"God’s anointing brings the most technically excellent dancer to his knees when he sees those just stretching out in worship...He always goes before us," wrote my beautiful ballet teacher.

this is what i’m talking about

the pros have it 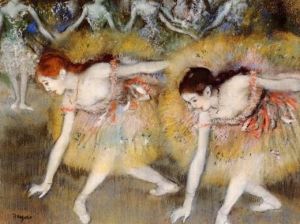